Sugar-crusted popovers what can I say! These popovers are THE BOMB, and one of my kids favorite breakfast treats (I’ll admit, they’re one of my favorite treats as well)!  They’re sugar crusted goodness on the outside and warm and gooey on the inside. They’re a cross between cinnamon toast, a sugar and cinnamon donut and a popover.
These popovers are more like a breakfast/brunch treat, or can even be qualified as a dessert, because they’re that tasty!  I mean look at those bad boys!  They bake up huge and look super fancy and complicated, but they’re really so simple to make.  Friends and loved ones will be impressed and thank you immensly when you serve up a batch of these!

Note:  These popovers, as all popovers, are best when served fresh and warm.  If you have leftovers, store them in a covered container overnight and then re-heat them in a 250 degree oven until warm. I usually freshen them with a bit with some cinnamon/sugar mixture after they came out of the oven.

for the sugar coating:

Preheat your oven to 400 degrees.

Get out a popover pan. If you don’t have a popover pan, no worries, you can use a standard muffin tin with 1/2 cup indentations.

Get your blender out and put in the following, 2 tablespoons melted butter, 3 eggs, 1 cup milk, 1 teaspoon salt, 1 1/2 teaspoons sugar
and blend for a few seconds.
DON’T ADD THE FLOUR YET! 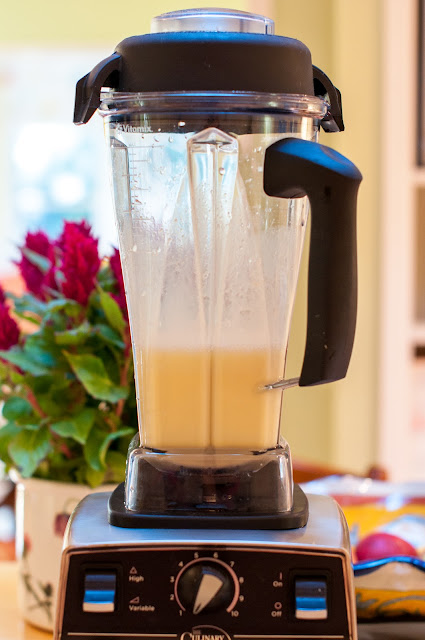 Add the 1 cup flour and blend for about 10 seconds, just until smooth.

Put the empty popover pan in the pre-heated oven for 5 minutes to warm up. I usually put my pan in when the oven temp reaches 275 degrees and then take it out when it reaches 400 degrees.

Take the popover pan out of the oven and divide the 2 tablespoons of melted butter between the cups. Just pour the butter into the tins and let it rest at the bottom. The butter will sizzle and brown, but that’s fine.

Blend the batter one more time to froth it up again.

I love this grand popover pan from Nordic Ware.  It may cost more than the normal popover pan, but it makes the perfect popover and they don’t stick to the pan. The pan is made of cast  iron, so it cooks up the popovers evenly.  I’ve had mine for 3 years now and I use it at least once a week, if not more, and it’s still looks brand new.   If you find yourself making popovers quite often, then I would invest in a good quality popover pan. 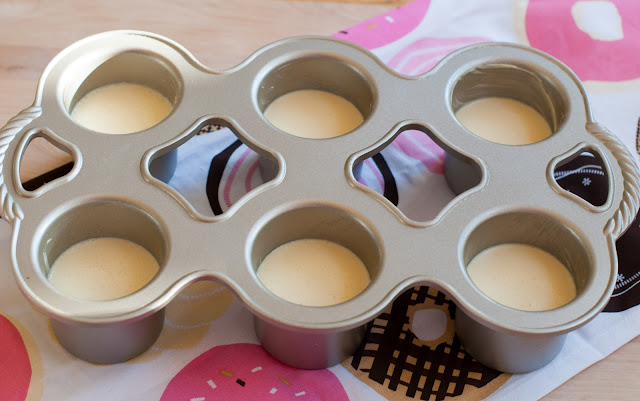 Put your popovers into the oven and bake for 35 minutes, or until the popovers are deep brown.  You can turn on your oven’s light to see the transformation, but do not open the oven door during baking, as this will cause the popovers to deflate. I baked mine exactly 35 minutes and they were perfection.

While the popovers are baking you can prepare your sugar & cinnamon mixture.  Just combine the 2/3 cup of sugar with the 1 teaspoon of cinnamon in a large shallow bowl and whisk the two together.  Cut the butter into small pieces, so it melts faster, and set it in a ramekin or small bowl.  Set these both aside until the popovers come out of the oven. 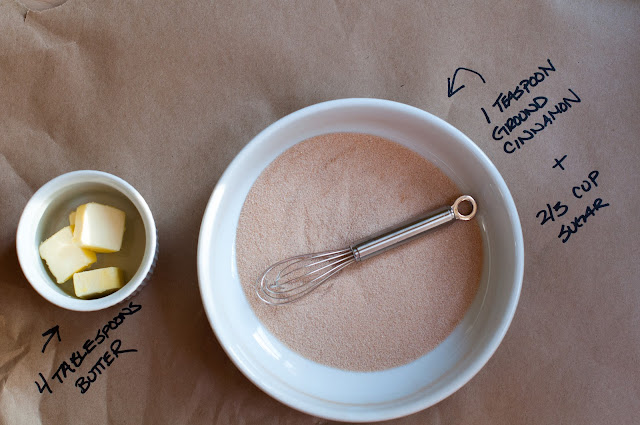 Remove the popovers from the pans and set them on a cooling rack. 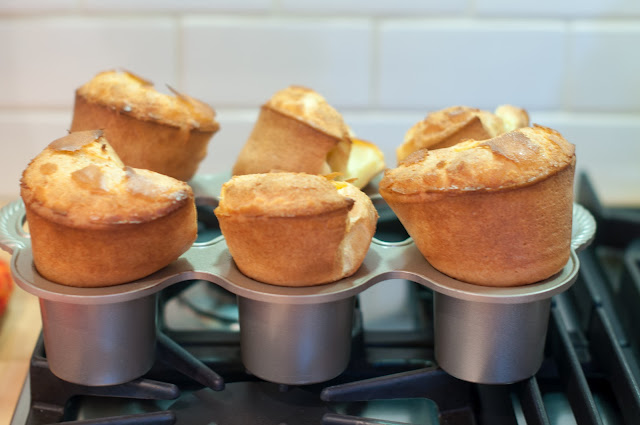 This is what the popovers looked like when I pulled them out of the oven.  They’re all twisty and funky looking.   Looks can be deceiving though as they were crunchy on the outside and warm and gooey on the inside. 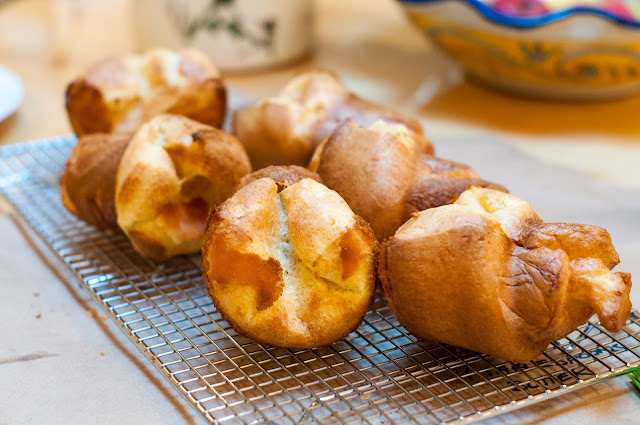 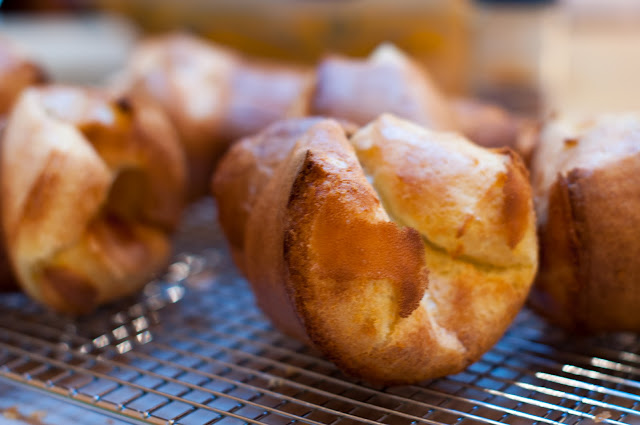 Now is the time to melt your butter.  Just stick the bowl in the microwave and melt away.  Once the butter is melted, you can start the buttering process.  Just grab a popover and brush it all over with the butter.  Make sure to get in all those nooks and crannies. 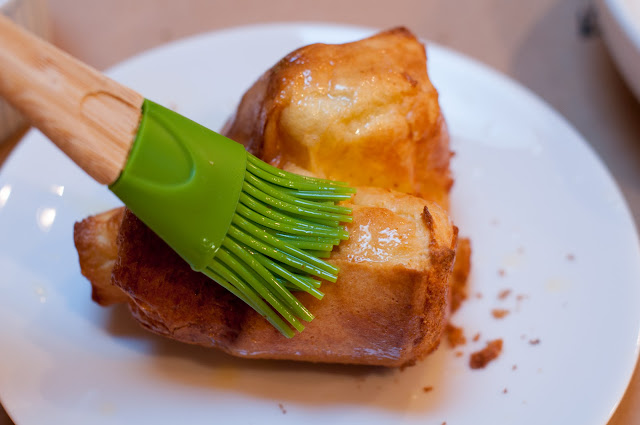 Next, dredge your buttered popover into the sugar and cinnamon mixture, making sure to get in all those nooks and crannies. 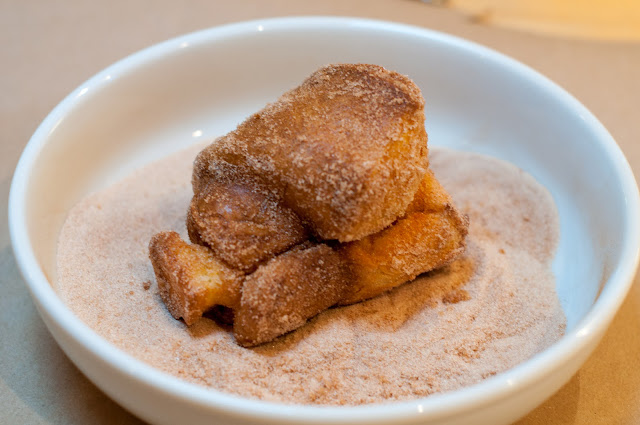 Once all of your popovers are covered in sugar, let them cool on a wire rack.  If your kids are home or you’re serving these for breakfast, then by all means put them immediately on a plate and dig in.

As you can see, they were devoured in a matter of seconds. I didn’t even get a word in from the kiddos until they were finished.  I actually think Eli ate his in one bite.
Check out that happy kid! 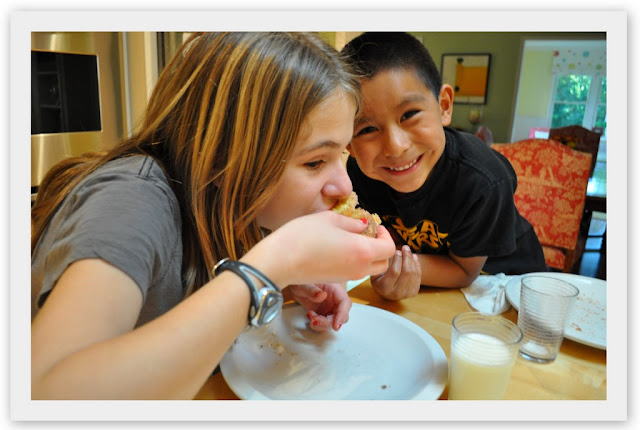 Now that I’m looking at these, they kind of look like fried dough but without all the grease that comes with frying!  BONUS! 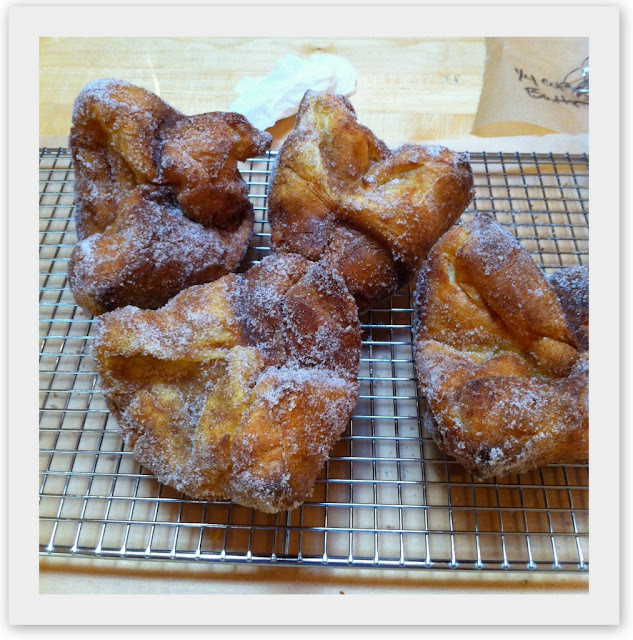 Come on and give these a shot at your next weekend breakfast.  Move away from the familiar pancakes and waffles and take a walk on the wild side!
5 from 1 reviews
sugar-crusted popovers

Save Print
Prep time
5 mins
Cook time
35 mins
Total time
40 mins
Author: Marin mama cooks
Recipe type: popovers
Serves: 6
Ingredients
Instructions
Notes
These popovers, as all popovers, are best when served fresh and warm. If you have leftovers, store them in a covered container overnight and then re-heat them in a 250 degree oven until warm. I usually freshen them with a bit with some cinnamon/sugar mixture after they came out of the oven.
3.5.3251

if you liked this recipe...

Hi! Welcome to Marin mama cooks! My name is Jackie Reale! I'm a natural chef, creator and manifestor. I showcase healthy recipes for the everyday cook.About Me...

This website uses cookies to improve your experience while you navigate through the website. Out of these cookies, the cookies that are categorized as necessary are stored on your browser as they are essential for the working of basic functionalities of the website. We also use third-party cookies that help us analyze and understand how you use this website. These cookies will be stored in your browser only with your consent. You also have the option to opt-out of these cookies. But opting out of some of these cookies may have an effect on your browsing experience.
Necessary Always Enabled
Necessary cookies are absolutely essential for the website to function properly. This category only includes cookies that ensures basic functionalities and security features of the website. These cookies do not store any personal information.
Non-necessary
Any cookies that may not be particularly necessary for the website to function and is used specifically to collect user personal data via analytics, ads, other embedded contents are termed as non-necessary cookies. It is mandatory to procure user consent prior to running these cookies on your website.
SAVE & ACCEPT